↓
Skip to primary content
Skip to secondary content
By now, you may have heard about the new iPod nano that came out to day – it has a capacity of 1GB and retails for $149. Yes, it holds 240 songs, but that’s not the selling point for a genealogist – the selling point is that this one holds up to 15,000 photos (and it can display them on the built-in color display – not a big deal, or on a TV screen, which is a big deal). It pulls the photos through iTunes/iPhoto (and it can provide a musical soundtrack to any photo slideshows you may put on).

At the Apple Store, the 1GB iPod nano is $149. As of this afternoon, all were showing as shipping within 24 hours. They are offering free engraving and free shipping. The optional connector – is called the Apple iPod AV Cable (M9765G) and is available at the Apple Store 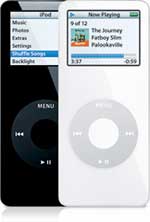 This beats using a slide projector.