↓
Skip to primary content
Skip to secondary content
It’s been a while since we mentionedNewsletter, and version 2.6 was released this morning. NewsLetter is, in the words of its developer, a free batch emailer, speciallly thought for newsletters. Its interface is very simple and intuitive, and it features the creation of plain text and HTML messages (simple or multipart), customization of subject and body using “smart tags” and attachments (including inline attachments in HTML messages). You can send the messages immediatelly or save them in MBOX format.

Many of us maintaining contacts with spread out members of the family (i.e. we are the unofficial official contact point for everybody), and this is an easy way to keep in touch, as well as perhaps generate an interest in genealogy from other family members. 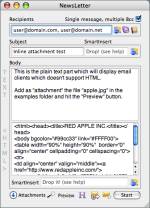 Version 2.5, December 26, 2005
– Added strong email verification. It should be now much faster and accurate (uses now a perl script and a powerful regular expression).
– Reworked documentation.

For a full ist of changes and fixes, please refer to Pescados Software.