First up: Synium has acquired MacFamilyTree:

Since version 3, MacFamilyTree has been developed by the Synium Software GmbH. Now, with version 5, we completely acquire the project in its entirety from OnlyMac Software, including development, distribution and support. Our long-standing experience within the Mac software market and especially with MacFamilyTree makes for a solid foundation in delivering reliable feature updates, continued support, quick bug-fixes and a true long-term perspective for your favorite genealogy tool.

Features of MacFamilyTree 5.0
* Brand new GUI (individually configurable)
* Completely re-written
* Apple’s Core Data technology is used to work with large databases that include: “information about tens of thousands of individuals, including digitized photographic images, sound files and movies”
* “Family Assistant” that is used to “graphically create” your family tree, including a fully animated editor that visualizes relationships.
* Still “fully compliant with GEDCOM import and export”
* Built-in graphics editor similar to a desktop publishing program for creating layouts of your genealogy data.
* World map replaced by a spherical earth – On the globe you can retrace the paths of your ancestors, aided by a huge database of locations worlwide and satellite imagery.
* HTML Export, for both standalone, hosted, and .Mac websites improved (including saved views being published with your HTML pages)
* Reports can now be modified and saved within the family tree. 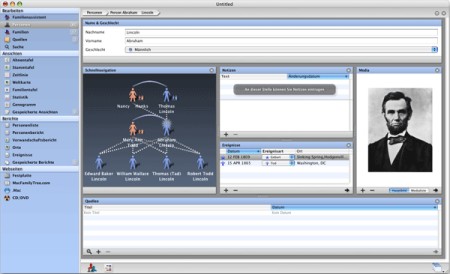 Synium has posted a visual history of MacFamilyTree

In the meantime, you can view the sneak preview of MacFamilyTree 5 here.