I have to say, I’m very impressed with iPhoto ’09.

“Faces” has been added to iPhoto as a way to organize and tag your photos. Once you’ve started assigning names to photos, it automatically “recognizes” photos with those other people, and labels them accordingly. Facial recognition is something I’ve seen in other software, but to see it added into iLife/iPhoto is nice. 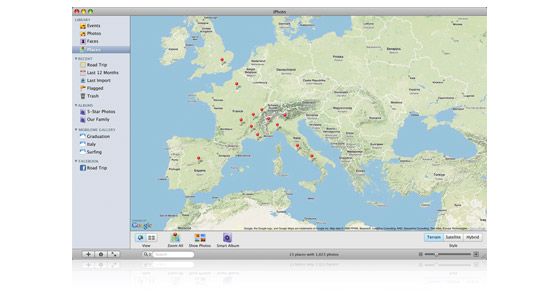 “Places” has also been added as a way to organize and tag your photos. While they emphasized the geotag aspects (GPS coordinates added to a photo’s EXIF information by your camera), it’s also handy to manually do it, and it plots out your photos on maps.

They’ve also added a “Travel Books” feature where you can have books printed out with maps and photos of the places you visited or are interested.

Both of these features could end up being very useful to genealogists in the long run. I have my doubts about how accurate the facial recognition will be when it comes to older or smaller photos, but even if you have to do some manually, it seems like a good way to keep track of everything.