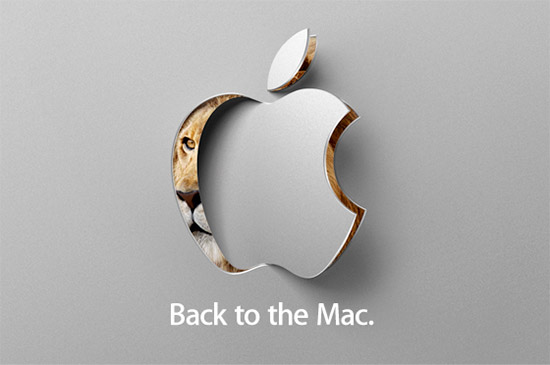 Today, at 10 a.m. Pacific/Noon Central, Apple will be holding their “Back to the Mac” event. As you can see from the invite above, there is a Lion in the background.

It’s pretty much a given that we’ll find out the details of Mac OS X 10.7 Lion today.

I’ve got a good feeling about today in addition to finding out about 10.7. A lot of us understand that Apple’s focus up through September of this year has been on the iPhone 4, iPods, and the iPad. The event at the beginning of September was focused on new iPods plus Apple’s new AppleTV as well. I think we’ll see some good stuff that is of particular interest to people who come across MacGenealogy.org.

From the invitation, plus all of the rumor sites, Amazon leaks, Apple.com forum “accidents”, I think this is close to a list of what we’ll see:

1) Mac OS X 10.7 – 100% Guaranteed. Look at the invitation above. I’ve not been keeping up on Mac OS X rumors. I’ve hard that some of the things that people like in iOS might make their way into it.

2) iLife ’11 with GarageBand ’11, iPhoto ’11, iMovie ’11 – 99% Guaranteed. This is based on an “accident” on the Apple.com forums where forums for the three components I mentioned were listed in the forums index. I’m giving it 99% since it’s not official yet, but it’s time for an iLife update. I really liked iPhoto ’09 with the new features, and one thing I’d like to see, and maybe this is more appropriate for Aperture, is more photo editing features that are normally found in Adobe’s Photoshop and other stand-alone editors. I know that iPhoto ’09 is first and foremost a photo manager, and it does an admirable job of that. I would like to see more photo editing features such as layers, good cloning features, and a few other things. Given that I do a lot of photo restoration, I’ll still be popping into Photoshop, but there are a few little things that could cut down on the instances of that. iMovie ’11, I’ve heard that iDVD has been merged into it. It makes sense.

3) 11.6-inch MacBook Air – 99% Guaranteed. Apple sees the iPad as the answer to netbooks, but CPUs and chipsets in the ultrasmall or ultraportable market have really come down in size while increasing in power, and a lot of people have been wondering when Apple would offer something smaller than the 13-inch MacBook, MacBook Air, and MacBook Pro. People miss their 12″ PowerBooks, and at this point the 13-inch MacBook Air is large compared to the offerings of the competition. A lot of companies have ultralight 11.6-inch and 12.1-inch notebooks that are packing quite a bit of performance in a small size. I’m giving it an 99% because it was mentioned in a forums listing, there have been so many leaks lately about specific components, and because Apple needs to do something with the MacBook Air. I love our 13-inch MacBook Pro, but something a little smaller and with a good resolution on the display would be great.

Apple has been building a huge datacenter in North Carolina that will soon be complete. There are a lot of guesses as to what it’s for – an expansion of their online content, a “cloud” style setup for people to store their music and videos, etc. I think it could be all of that. If it’s setup properly it can easily handle just about everything that’s been speculated about it.

Mac minis and iMacs have received good updates this year, as have the Mac Pros. I don’t see them being updated at this event. I still want a little server that can function as backup machine for our Macs and iOS devices in the house. I don’t see that happening though.

I think some of the recent gaming software that’s come out for the Mac, Valve’s Steam platform, will probably be highlighted. Valve has been very successful with it. I also think AutoCAD will be highlighted since its return to the Mac is a big deal.

A part of me thinks Family Tree Maker for Mac will show up somewhere. I doubt in Apple’s or Steve Jobs’ presentation, since Mac users have had a solid and healthy selection of genealogy software since FTM didn’t make the transition to Mac OS X a decade ago, but FTM for Mac is a big deal and the theme is “Back to the Mac”. It would certainly be a good time for Ancestry.com to announce more details about it.

Coverage
Apple Insider will provide live coverage, and I’ll be following a few websites and posting about it as it happens. As I said, I’m excited about it. I’ve been very happy with Mac OS X 10.6 Snow Leopard, and I look forward to seeing where things go next.