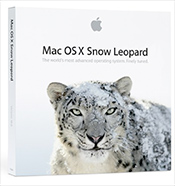 If you are a Mac OS X 10.6 Snow Leopard user and applied Apple’s update last week, Security Update 2012-001, and you are running applications under Rosetta that were written for the PowerPC architecture that used to power Apple’s laptops and desktops, you may have problems with those applications.

Mac Rumors reported that it was causing problems for those Mac OS X users who were still using Snow Leopard to run older PowerPC applications. Discussion threads on Apple’s official forums about the problem were cropping up.

I know of a few Mac genealogists who have Macs running Snow Leopard because they do not want to pay to upgrade various applications (Photoshop comes to mind), the newer Intel-based applications pale compared to older versions (Quicken…), as well as specific genealogy software that they are happy/comfortable with for the time being.

Fear not, users of Rosetta, Macworld is reporting that Apple has released Security Update 2012-001 version 1.1 that fixes the issue.

It’s available through Software Update, but is not yet up on Apple’s support site.

↑
We use cookies to ensure that we give you the best experience on our website. If you continue to use this site we will assume that you are happy with it.OkPrivacy Policy