MacFamilyTree 7 has been released, and it’s a major release to this OS X genealogy application! It’s now available through the Mac App Store (MacFamilyTree 7 – Synium Software GmbH) at a special upgrade discount of $29.99 (US) through July 31, 2013. It’s also celebrating it’s 15th year here in 2013!

This is a very massive upgrade, with a completely new interface. Among the improvements and changes:
– Uses iCloud to keep your devices up-to-date/in sync (iPhone, iPod touch, or iPad)
– FamilySearch Access (free)
– One-click recording of direct relative’s data
– Updated/new charts and reports
– Virtual Globe – rewritten from scratch and can show the spread of relatives/families over time
– New Virtual Tree
– New Name Distribution Chart
– Save video and audio footage when interviewing contemporary witnesses
– Can share charts and reports easily across Mail, Facebook, Twitter, or Messages (OS X 10.8 Mountain Lion) with friends and relatives from within MacFamilyTree

MacGenealogy.org will be going in-depth on this new release over the next few weeks!

Heredis, a popular genealogy application, is now on sale for 35% off through Sunday, June 9, 2013 on the Mac App Store – Heredis 2017 World – BSD Concept. It went on sale last week.

Heredis is a cross-platform compatible genealogy application that works across Macs, PCs/Windows, iPhones, iPod touches, and iPads. You can synchronize your genealogy data across all five platforms if they are using the latest versions of Heredis.

Recent Changes – Heredis 2.1.1 (March 2013)
– Stabilization of the application
– Localization updates
– Improvements of the interface
– Other improvements

A few weeks ago, Family Tree version 1.1.0 was released. Family Tree is a genealogy application for Mac OS X users from Software Solutions & Technologies AG, based around a simple user-friendly interface. GEDCOM Import/Export is being worked on, along with expanded export functionality, as is styled printing.

Snapheal 2.0 has been released, and this is a major update/upgrade over previous versions of Snapheal. It’s also on sale for 60% – $7.99 US (limited time) in the Mac App Store – Snapheal – Fix your photos. – MacPhun LLC.

Snapheal is a Mac OS X app that helps repair damaged photos (among other things). It can fix creases, tears, other unwanted objects and damage.

I have not used Snapheal, but for $7.99, I’m tempted to pick it up and try it out. I use a combination of Akvis Retoucher and Adobe Photoshop, which is an expensive combination. For those on a budget, Snapheal + iPhoto could get you a lot of the way there, depending on your goals, and Snapheal works with both iPhoto and Aperature – images can be imported from both, and then exported to both, as well as Photoshop and Adobe Lightroom.
END_OF_DOCUMENT_TOKEN_TO_BE_REPLACED 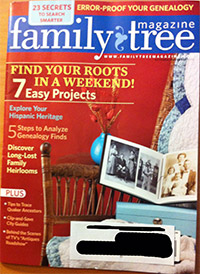 Here is a brief snippet from Family Tree Magazine:

Anyone who’s ever done genealogy on a Mac will be able to jump right in and start using Heredis, no manual required (though there’s an 89-page PDF user guide, just in case). Fast and easy data entry is a particular point of pride for Heredis, which lets you enter and edit data not only on an ancestor’s “card,” but also in a Family Group Data view. Maps for your ancestors’ places are generated automatically—no more wondering where that village is located. Almost everything, including the toolbar, is customizable. Synchronizing with the optional iOS apps or with Heredis on other Macs, and even PCs, is a snap.

If you want to read the whole review, I received my copy of the October/November edition of FTM this morning, and it’s on page 70. It might already be on the racks in some of the larger stores like Barnes and Noble. If you are a Family Tree Magazine Plus Now! member, you can read it here.

Family Tree Magazine has always done a good job of covering Mac genealogy software and this follows that trend.

Leister Productions has released Reunion 10.0.4, the Mac OS X genealogy application that many use, and it’s a huge update, mostly consisting of bug fixes, with a few additions for usability and other areas.

First and foremost, if you are one of those lucky ones who bought a new MacBook Pro Retina, they have fixed some of the display issues with it. If you are still on a PowerPC Mac (PPC), there is also some fixes having to do with files created on a PPC Mac that were uploaded to ReunionTouch – Leister Productions, Inc (App Store).

There are also several user interface fixes and updates, as well as usability fixes such as web searches opening up your selected browser.

For those needing to incorporate LDS functionality, Temple Codes will display in the Place column in the People List, and tooltips were added to the bottom icons in the LDS Ordinances window.