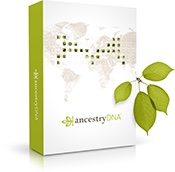 I normally don’t run sales deals on MacGenealogy.org that aren’t tied directly to software, but this is a good deal, and doesn’t happen too often – Ancestry.com is running a 20% discount on AncestryDNA, their DNA test. It started yesterday, April 23, 2015, Ancestry’s “DNA Day”, and it runs through April 27, 2015 (Monday).

If you are curious about how Ancestry.com’s DNA test stacks up, and whether it will be useful to you (just about any of the DNA tests have the chance of helping you these days), then I suggest you read this very in-depth comparison at The Legal Genealogist:

As the article points out, Ancestry’s strong point is the integration with your family tree.

In general, even if you don’t want to test, or have already tested, you should be following Judy’s DNA articles on her blog, as they are among the most informative, and not just from a legal or medical point of view.

Heredis is cross-platform, both Windows and Mac, and also has a free mobile/iOS version for iPads, iPhones, and iPod touches.

The announcement video is below (and it’s in French, and doesn’t show Heredis itself):

Of course, the Apple Store is down ahead of the event.

Obviously, Apple’s Watch is going to be the main focus, with pricing, new apps, and release information making up the main part of the presentation.

There is a lot of speculation about additional hardware being introduced (MacRumors has a good summary), and the thing that’s of interest to me (and to Mac-using genealogists) concerns non-Watch hardware. Not that the Watch isn’t cool, but I don’t consider it a must-have for myself. Anyways, the speculation is focused around new 11-inch and 13-inch MacBook Airs, with a move to Intel’s Broadwell CPUs, with most of the other options remaining the same. The same holds true for the 13-inch Retina MacBook Pro.

The one rumor I find very interesting, is about a 12-inch Retina MacBook Air. It’s been several years since we had a 12-inch portable Mac offering (going back to the G4 PowerBook days I believe). It’s supposed to be a completely redesigned Mac laptop, with fewer ports and with a much thinner build than current Macs.

In the realm of “probably not happening” are updates to the iPad mini (the iPad mini 3 was disappointing due to the lack of major improvements outside of the fingerprint sensor), and the release of a new iPad size, the fabled “iPad Pro”, which I’ve seen mentioned as being anywhere from 11 to 13 inches.

You can watch the event through AppleTV, or point your web browser to:
http://www.apple.com/live/2015-mar-event/

The Mac genealogy program, MacFamilyTree 7, and its companion iOS genealogy app for the iPad/iPhone and iPod touch, MobileFamilyTree, have both been updated to version 7.3.3.

This is a minor fix, correcting an issue with uploading persons to FamilySearch.

You can update MacFamilyTree through the Apple Mac/App Store (US) or through Synium Software’s website.

MobileFamilyTree can be updated from within the iOS device (check the App Store), or through iTunes (US).

Ben Sayer at Genealogy Tools, and more importantly, Practical Citation, has released on the Kindle platform (compatible with Macs, iPads, etc., see below), two important books for Mac fans of Reunion 10 and Family Tree Maker 3, along with one for Family Tree Maker 2014 (the Windows version). The full title of the three ebooks is “Practical Citation, A Guide to Simply and Safely Recording Sources and Citations” and are available right now for download:

It’s easy to find a genealogy application that you like, and to start using it, plugging in all kinds of information. I won’t say it’s “too easy”, but if you’ve been closely following the whole “Genealogy Do-Over” movement, you’ll have seen numerous people on blogs or in comments, who talk about one of their biggest problems with their genealogy research being a lack of sources (proper or otherwise) after plugging in all kinds of information over many years.

In his Genealogy Do-Over Announcement, Thomas MacEntee directly mentions this:

How many times have you thought about doing the same thing? Did you start your research the same way I did, by just collecting names, grabbing stuff from other online trees, or pasting text into your genealogy software? Lately, has the prospect of going back and citing sources and proving facts and evidence brought you down and ruined your genealogy buzz? Do you throw up your hands and say, “I give up!” only to return to the same review and edit process days or weeks later?

Most of you who have been doing genealogy research for many years, or who have changed genealogy programs (in particular) have probably encountered the two big problems that Sayer discusses:

These books/information are already available to you if you have a subscription to Practical Citation, but this is the first time they’ve been made widely available in book format.

If you are interested in these ebooks, and you do not have a Kindle, fear not – Amazon has provided free software to view Kindle titles on your Mac, PC, iPad, iPhone, etc.

If you are wanting to watch some of the sessions that are being streamed from RootsTech 2015, and you have an Apple TV and a compatible device, it’s very easy to stream to your HDTV, thanks to AirPlay.

On your compatible Mac or iOS device (iPhone, iPad, iPod touch), just load up the RootsTech 2015 website in your browser, and have it stream (mirror) through AirPlay to your Apple TV/HDTV. You can find the full streaming schedule here, and remember that all times listed are Mountain Standard Time (MST). The first session starts in half an hour (at 9:30 am if you’re in CST like I am).

Regardless of which method you use, you will need a 2nd Generation Apple TV or later. I have confirmed that the RootsTech website’s streaming is compatible with iOS devices, on an iPad 2 running iOS 8.1.3
END_OF_DOCUMENT_TOKEN_TO_BE_REPLACED