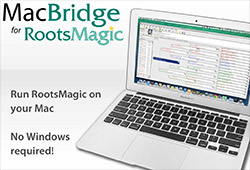 Two major announcements for fans of RootsMagic – one, as has been mentioned/hinted at in the past, the folks behind RootsMagic are working on an OS X-native version of RootsMagic, the popular Windows genealogy program.

The other major announcement, one that concerns the here and now, is that they have released MacBridge for RootsMagic, a utility that allows you to run the Windows version of RootsMagic 6 on top of OS X without the need for a virtual machine (such as Parallels Desktop or VMWare Fusion) or a WINE or CrossOver environment/layer. It does use the native filesystem of your Mac. It’s on sale for $9.95 (normally $14.95).

This is welcome news for those RootsMagic fans who are wanting to switch to Macs, and who don’t want to go through a full install of Windows, or deal with compatibility layers/emulators.

Below is the press release:

MacBridge for RootsMagic is different than other solutions you may be familiar with. For starters, it does not install Windows on your Mac. It also does not create a slow and bulky virtual computer. It runs right on your Mac, using your Mac file system. You can even put the RootsMagic icon on your dock for easy one-click access! So while we are busily working on an actual native Mac version of RootsMagic, MacBridge for RootsMagic 6 gives you the ability to work on a Mac today.

A video on the installation of MacBridge for RootsMagic 6: