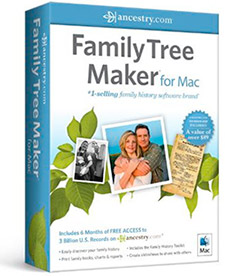 First off, thanks to Gary and J for emailing me about it. Family Tree Maker is now available for pre-order through a few places (links below). We did know that it would be available before the end of November, and that looks to be accurate. The pre-order information says early November. I have updated the FAQ for Family Tree Maker for Mac to reflect the information below.

It is now available for pre-order:
* Ancestry.com

It might make an appearance at some of the retail stores that Family Tree Maker for Windows is sold at, such as Best Buy, Fry’s, etc.

I had hoped that we’d hear a lot more about Family Tree Maker for Mac at today’s Back to the Mac event held by Apple. The return of Autodesk’s AutoCAD was heralded by Apple at the event today and it had been quite a while since AutoCAD had been available on the Mac platform (longer than Family Tree Maker). I guess it makes sense that FTM for Mac wouldn’t be as prominently mentioned – when AutoCAD went Windows-only, it left a huge hole in the Mac software lineup. With genealogy software, there has been a strong and steady presence on the the Mac platform, including through the transition of Mac OS 9 through Mac OS X, so FTM leaving Mac didn’t cause as much of a stir as AutoCAD did.

I will say this, with half of new Macs going to first-time buyers, Family Tree Maker for Mac couldn’t have come at a better time.

Family Tree Maker for Mac 2010 versus 2011
I’m hoping to get this clarified soon, but on the Ancestry.com site

it mentions Family Tree Maker 2010 for Mac, while the PC/Windows version is at 2011. Ancestry.com had told us that it would be at the same level as the PC version, so it doesn’t make sense that they would release the 2010 version right after the 2011 version for Windows came out. I’m going to assume that it’s just remnants of the original 2010 promotional material. When FTM for Mac was announced, FTM 2011 for Windows hadn’t been announced.

Some of the features mentioned in the product listings/box details:
* 6 months of free access to US Records on Ancestry.com (the Amazon.com version)
* Print family books, charts, and reports (typical)
* Includes Family History Toolkit
* Creates slideshows
* Scan images directly into FTM from a digital scanner.
* Integration with Ancestry.com

Compatibility with Family Tree Maker for Windows
This is a big deal for most people interested in FTM for Mac. Ancestry.com FTM site

So it might be that PowerPC users are left out.