Developer’s Description
Osk offers everything you would expect a genealogy app should do, but does so really easy, extremely fast. You can draw family trees and save them, create a family website. All with a click of a button.

Future Plans – Osk 5 (Posted October 2010)
From the developer: Even though it appears that the site has been sleeping, I haven’t. I have been designing and planning a new release. The version 5 that I have not dared to put out yet. It is still being worked on, the work happens to be greater than I had initially thought. But with new versions of the development tools and the iPad showing up, limitless possibilities.

Release History
Osk 4.71.0 (July 26, 2009)
* Now you are able to have more information on each person in your database. You can keep e-mails and phone numbers and more directly. You can of course add them to the information.
* Lower memory footprint. According to tests this new version uses less memory than before.
* More speed. Even though Osk is the fastest genealogy software out there, the software is even faster than before.
* There have been a few bugs reported since last version, and they have all been fixed.

Osk 4.61.0 (January 9, 2009)
* This version fixes all reported bugs
* now always sorts all names based on preference settings.
* The web export has been updated
* GEDCOM export is now faster
* New birthday display.
* Every small snippet of code has been touched. 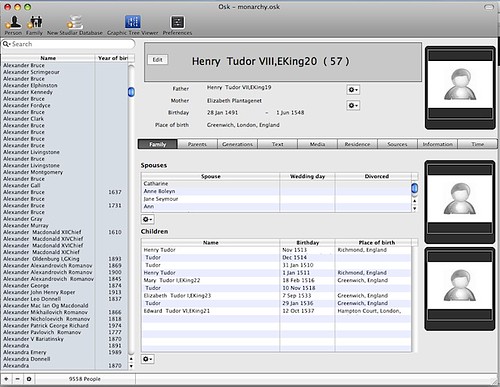