So What is GedScape?
GedScape is not a genealogy application for Mac OS X in the traditional sense – you don’t use it to create or update family trees. Instead, it’s used to work directly with navigating/browsing GEDCOM files, generating reports from GEDCOM files, and either converting those GEDCOM files to other character sets (such as converting to or from Unicode/UTF-8 GEDCOMs on Macs), or generating an HTML-based website from those GEDCOM files. It can display many of the same reports and charts that typical genealogy software can generate. The developers describe it as a program for browsing, manipulating, converting and extracting data from GEDCOM files, and that’s a very concise summary, but I think it doesn’t do it complete justice.

The Requirements and Cost of GedScape
It requires at least Mac OS X 10.5 running on Intel Macs, but there is a Windows (XP, Vista, 7) version, which maybe important to some people. The Mac version has been available for just over a year. It has two prices for new purchases – $39 for 1 years worth of support and updates or $64 for 3 years worth of support/updates. Upgrades cost $25 (1 year of support/updates) or $50 (3 years of support/updates). There is a demo/trial version and the sample GEDCOM file will allow you to try out all of the features of the registered version, and I deliberately used the sample GEDCOM file so that you can see exactly what I did. If you import your own GEDCOM files in the trial, there will be restrictions.

As far as the price, I will cover whether I think it’s worth it or not later in the review, but I think the three year support/update price is comparable to commercial Mac genealogy applications – most have required us to pay upgrade fees in the past three years.

Following Along
You can download GedScape and see all of the features I discuss for yourself, even in the trial/demo version, here: Download Link.

After you install it, open GedScape, select “Continue Unregistered“, and when it presents the “Open GEDCOM” dialogue box, select “Cancel“. Go up to the “File” menu and select “Open Sample GEDCOM“.

Design and User Interface
At first glance, it doesn’t necessarily feel like a Mac OS X program, and it’s incredibly simple. You might think that it’s because it’s cross-platform, but ohmiGene shows that you can have cross-platform apps and not lose the “Mac” feel. 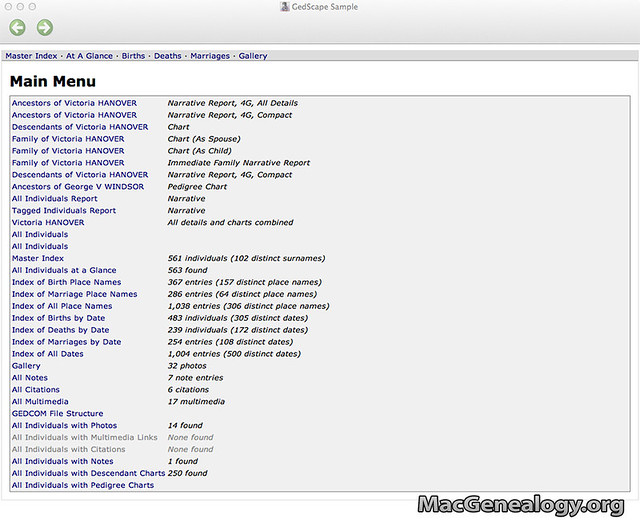 My instincts say that the interface/design is the way it is for two reasons. First, the focus of GedScape is on navigating, browsing, and manipulating GEDCOM files. There maybe all kinds of fancy and extensive reports generated from those GEDCOM files, but at its core, it’s a GEDCOM navigation/viewing utility. Yes, GedScape has top-level controls – File, Record, Report, and Help, but everything else as far as navigation is contained within a single menu inside of the GedScape window, and once you’ve spent a minute or so working with it, you’ll see what I mean.

It should be noted that you can change the color scheme. I went with the default.

Second, and I think this is the bigger reason – what you see under Mac OS X is for all intents and purposes identical to what you see if you generate a website from the GEDCOM file. I’ll cover that a little later in this review, but it’s very important.

Now I haven’t interviewed the developers of GedScape (something I’m planning on doing), but the first time you generate a website with it, and browse the website, and then look at GedScape running under Mac OS X, you’ll see what I’m talking about. I believe it was a deliberate design decision, and while many know I’m huge of apps being as “Mac-like” as possible, there are exceptions, and this is one of them.

It’s actually lightweight enough and structured in such a way that I wonder if they are planning on an iPad/iPhone version at some point. Given that it’s a GEDCOM navigation/viewing utility and not for the creation of new GEDCOM files or family trees, I could easily see it being adapted to a touchscreen interface.

Focus
One thing that impresses me is how focused it has remained. I could see the temptation that there might be in making this into a fully-fledged genealogy application, but they have chosen not to, and I think it’s a wise choice – there are no Mac OS X utilities like this, and while there are some Windows genealogy utilities that have similar functionality, if they were to expand this into a fully-fledged genealogy application, the developers would find themselves in a very crowded and competitive field. Choosing to stay focused on GEDCOM viewing and navigation makes them stand out. “Software Bloat” (Wikipedia) is not an issue here thankfully – unnecessary features have not been added it. To use a cliché, “it is what it is”, but that’s actually good in this case. 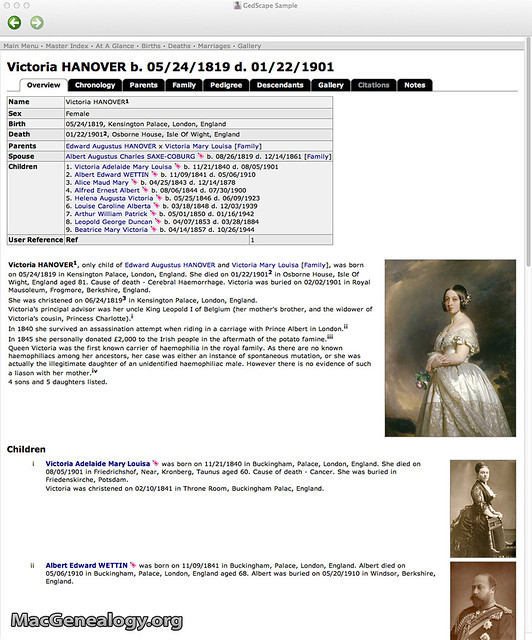 Preferences, Reports, and Interface Customization
There aren’t that many Mac genealogy-related apps that allow you an extensive customization of what you see – GEDitCOM is notable in that aspect. GedScape has an extensive capability to modify everything you see in the interface and reports, mostly through the GedScape Preferences (which is unified). See the Customization page of the online User Guide for details.

Help & User Guide
The Help/User Guide is very extensive – I opted to show you the online version (link), but there are local copies of those files and screenshots, It’s a very extensive and very well-illustrated user guide. Check the Main Index page and the Reports page for examples.

In addition to Unicode/UTF-8 support, GedScape also supports the GEDCOM 5.5.1 standards (draft) as well as LDS options (which can be toggled on or off). 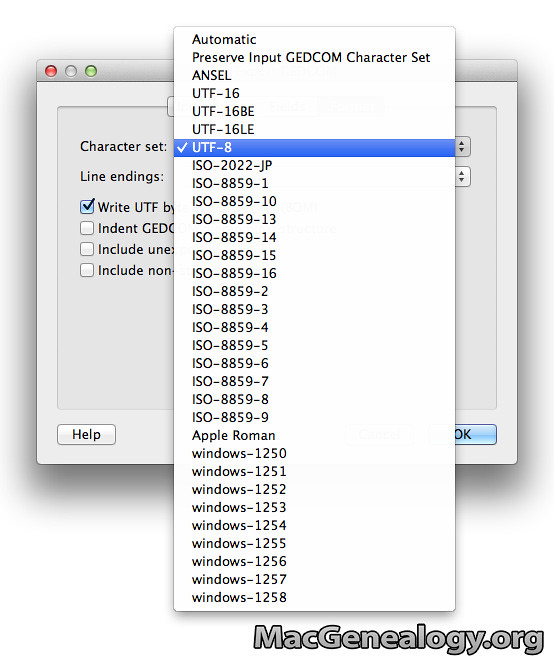 It does give you a lot of control as well when converting GEDCOMs – it’s very easy to generate a converted GEDCOM file with certain areas or individuals removed (or groups of individuals), or even generate a GEDCOM where all individuals born after a certain date have been removed or “privatized” (certain details removed, but the entries remain), to protect living individuals. 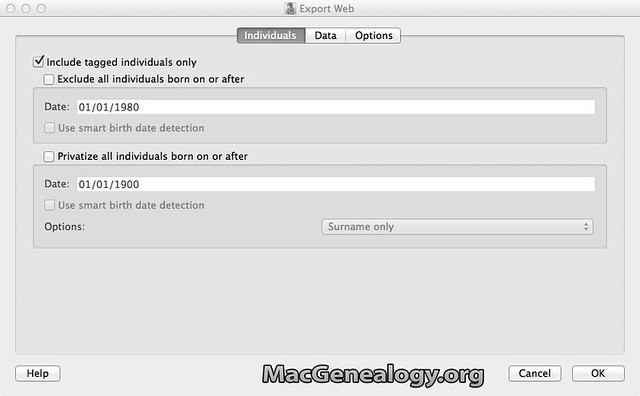 Note: They do ask that when you export a GEDCOM file where you’ve privatized information, that you check to make sure that it was in fact privatized, as well noting the fact that linked records can still provide clues. See the GedScape Export Privacy page for full details. 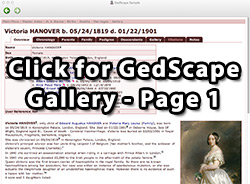 One very unique thing about GedScape’s interface and HTML output, is that it’s nearly identical to what you see in OS X. When you are running GedScape under OS X and you generate a website from the GEDCOM you are viewing, what you see when you start opening the web pages under Safari, Chrome, or Firefox is nearly identical to what you see under Mac OS X. That is why I’m more than willing to cut them some slack on the non-Mac feel to the navigation interface under Mac OS X. 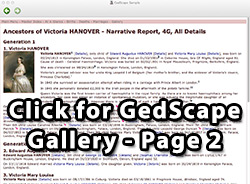 The “Hidden” Power of GedScape
For me, there is a “hidden” power of GedScape, namely it’s report features. It’s report feature is pretty amazing for a genealogy utility that seems to have a narrow focus. With the screenshots I took, I’ve barely scratched the surface, and the one I would love to show – All Details and Charts combined of Victoria HANOVER, I can’t even do so because of Flickr size restrictions – it’s massive, around 1280×24600 give or take a few vertical screens. There is also the option to generate individual reports for website.

Criticisms of GedScape
The only two technical issues I had were that I could not generate HTML/website output for individual reports, and I was unable to generate a PDF file from the Print feature. I could generate a Print Preview, and it would properly display, however I could not get any PDF output. Whether this is due to my particular system or due to issues involved with GedScape being a cross-platform application, I do not know. I will try to test on another Mac later on. These two problems are not show-stoppers for me at this time. It should be noted that I had no problems generating HTML/website from the GEDCOM as a whole (or parts of the GEDCOM). It was just with individual reports.

The other criticism I have is more of an issue concerning personal preferences. I found myself wanting to use my keyboard to navigate back and forth – it’s quite easy to keep clicking links, taking you from one person or location to another, and finding yourself half a dozen links into a GEDCOM file then wanting to back out. I kept thinking it would be nice to have some keyboard shortcuts, or be able to use gestures with say a Magic Trackpad.

One suggestion I have for the developers of GedScape: work to get GedScape included in Apple’s Mac App Store. There is very little in the way of genealogy apps on the Mac App Store, and GedScape could use the broader exposure.

Conclusion: Is it worth purchasing?
I won’t say this utility is for everybody, but for those people who deal in a lot of GEDCOMs – GEDCOMs they download off the web, that they exchange with distant relatives, etc., this could be a must-have utility. It makes it easy to examine the GEDCOM file itself, and even view the raw GEDCOM data, and the conversion utility works great.

If you are only dealing with GEDCOMs you generate, or occasionally download or receive from distant relations, it probably won’t be worth it.

The price does feel a little high (I would opt for the three year option) , but on the other hand if you are dealing with a lot of GEDCOM files, it can save you a lot of time, jumping in and out of GEDCOMs (and yes, you can drag and drop GEDCOM files on GedScape to load them).

All of the actively-developed Mac genealogy apps can, in theory, be used as GEDCOM readers and browsers, but in terms of practical use, it can become time consuming since some apps want you to go through a whole import process, complete with generating a new database. GedScape is designed from the ground up to be a GEDCOM utility, and the speed and design reflect it.

It’s one of those utilities that when you need it, you really need it. For some genealogists, I believe this will be a must-have utility.

Don’t just take my word for it – download it for yourself and follow the instructions I mentioned at the top for opening the sample GEDCOM file (the sample allows you to view all of the features).