[wpfmb type=’warning’ theme=2]Several of the genealogy applications listed below have been updated or have major/new releases available, and this information will be updated (Feb 2015), however if an application is listed as supporting Unicode, etc., newer versions should continue supporting such features.[/wpfmb]

Background of This Article
For a brief background of how this article came to be, see the Mac Genealogy Software and GEDCOMs post. The issue came up with somebody migrating from an older version of MacFamilyTree to a newer Mac genealogy application.

For more on the underlying issue, see the Unicode, UTF-8, GEDCOM 5.5.1, GEDCOMs, and Macs article. If you find yourself needing to convert Unicode GEDOM files to another format, see the Conversion of Unicode GEDCOM Files on a Mac article.

Below the brief listings of Mac genealogy software and their results, I’ll explain in-depth, the support for Unicode GEDCOMs.

Notes: Gramps and MacFamilyTree seemed to handle the odd stuff better than the other applications. GenealogyJ was able to handle some odd things, while ignoring others. Gramps didn’t put up any notices about problems – either it was robust enough to handle them, or it wasn’t and was ignoring them. This maybe due in part to Gramps and GenealogyJ being developed on or for Unix-like systems such as Linux and Mac OS X.

Unicode Not Fully Supported, UTF-8 Supported
* PAW2U version 100 (see further in the article for an explanation)

* MyBlood 1.3.1024.3.1 clearly has support for many character sets including UTF, but it would not advance past the open dialogue. Whether this has to do with it being in demo mode or not, I’m not sure. If you click on the image to the right, it will take you to a larger version hosted at flickr that will show you just how many character sets MyBlood is supposed to support. MyBlood may even have the largest list of supported character sets. Unfortunately MyBlood was last updated in August of 2010.
* Osk 4.7.1 seems to have support – you can select it in the dialogue, but it was having a problem with loading in general. Osk was also last updated in 2009.
* Heredis X.2 10.2.6 – PowerPC only (Note: There is a new Heredis for Mac in development, to take full advantage of Mac OS X Lion, and that might support Unicode).

Note: Both Family Tree Makers for Mac, and PAW2U could handle the GEDCOM files once the Unicode characters had been stripped. I explain further in the FAQ – Unicode, UTF-8, GEDCOM Files, and Macs article about converting GEDCOM files for use in these applications.

Breakdown of individual Mac genealogy applications and their Unicode/UTF-8 support
I took a look at all of the major Mac genealogy software, as well as provided a few solutions to dealing with the problem at the Unicode, UTF-8, GEDCOM 5.5.1, GEDCOMs and Macs article. Most of us will never run into this issue, but for those who do, it’s nice to know you’re not alone, and it’s nice to know that Unicode support is very robust on the OS X platform.

Note: I did not post screenshots or in-depth information on all Mac genealogy apps – some didn’t have a need for it because they worked fine or there were issues preventing the GEDCOM test files from being imported.

This was using a GEDCOM file from an older version of MacFamilyTree 4.x as well as a test Unicode 8 GEDCOM file. As a matter of fact, as you can see from the screenshots below, some genealogy applications correctly identified that it was from MacFamilyTree version 4.5 and that the character set was Unicode.

You will need to convert any Unicode-encoded GEDCOM files headed towards either Family Tree Maker for Mac. Please read the Conversion of Unicode GEDCOM Files on a Mac article for more details.

Familienbande – importing a Unicode GEDCOM file, allowing you the option to select the encoding, and also putting up a warning that there are problems with dates. 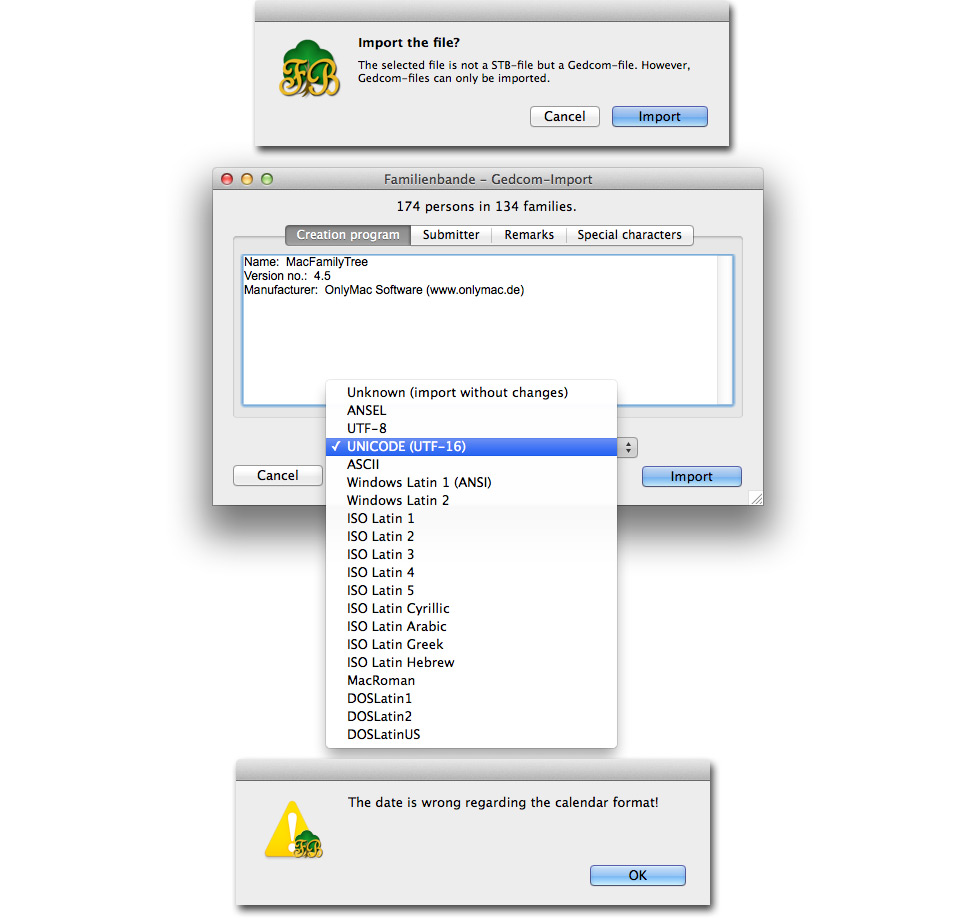 GEDitCOM II
There’s not much to say about GEDitCOM II – it worked just fine.

iFamily correctly importing, and determining that it was a Unicode formatted GEDCOM file from MacFamilyTree 4.x:

MacFamilyTree
MacFamilyTree was one of the first to fully support Unicode. Unicode support was added to MacFamilyTree in Version 4.0 which came out in August of 2004.

In September of 2005, with the beta version of MacFamilyTree 4.2.0, Unicode GEDCOM files that were exported out of MacFamilyTree were given the extension “.uged” to differentiate them from non-Unicode GEDCOMs. iFamily for Tiger (now Leopard) added .uged (UGED) as an acceptable GEDCOM file extension. Although it’s not too well publicized, which might cause some confusion, at least it’s a simple attempt at clarifying Unicode GEDCOM files. We obviously can’t wait around for a new GEDCOM standard to arise. While nobody wants a fragmented “market”, there’s nothing wrong with companies and developers supporting each other, such as iFamily supporting .uged.

Now this isn’t really a fair test, but this is MacFamilyTree 6.2.6 importing Unicode GEDCOMs from the MacFamilyTree 4.x days. MacFamilyTree had no problems with the GEDCOM tags, but did raise warnings about dates that I played around with: 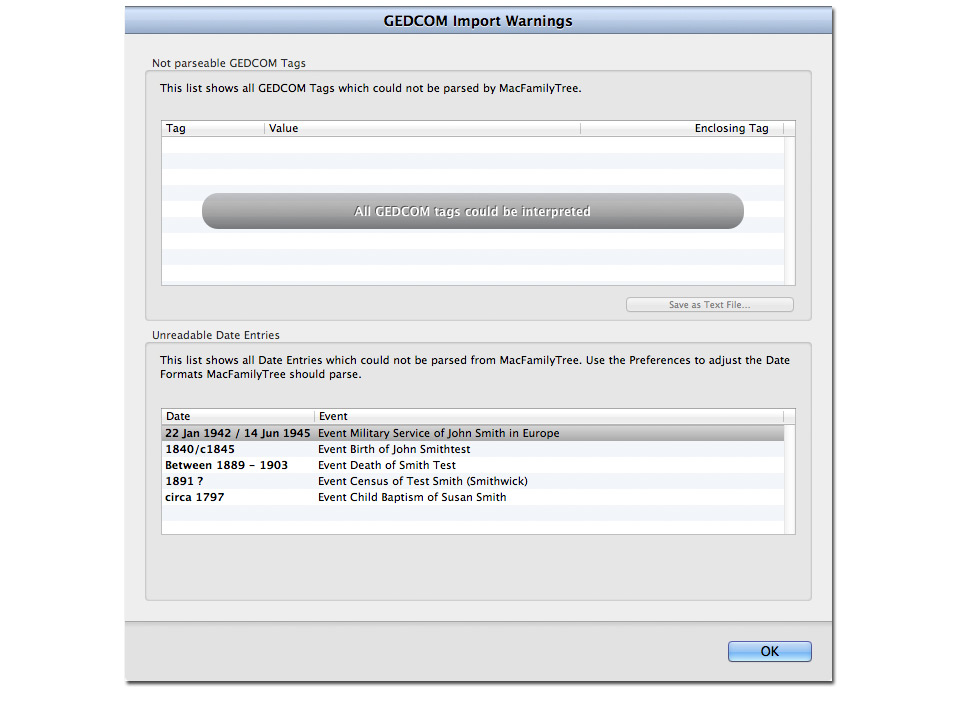 Not sure why MyBlood froze on importing this GEDCOM – it supports Unicode. I did correct the media paths to reflect Mac instead of Windows, but it made no difference. 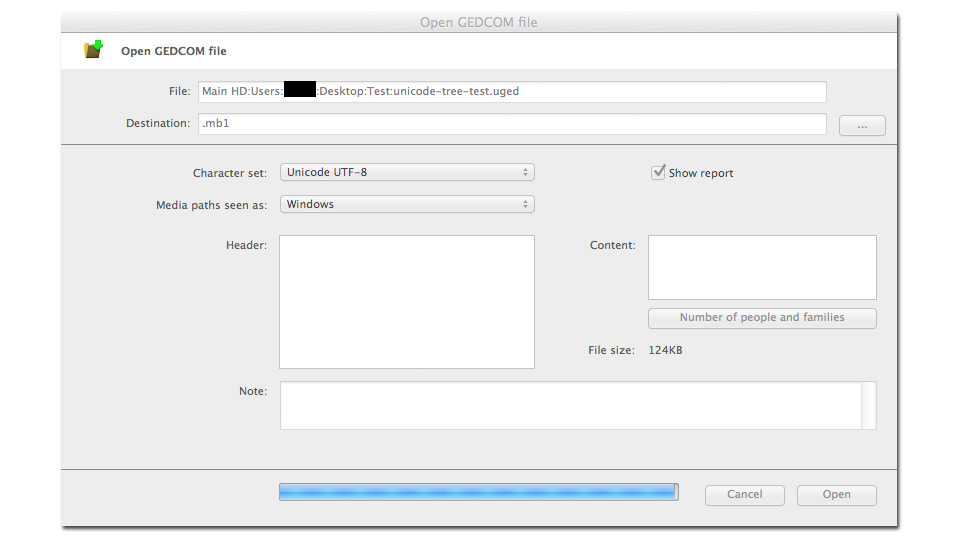 ohmiGene
ohmiGene 5 added Unicode support in version 1.60 which was back in late 2007. I had no problems importing in ohmiGene 5.06.

PAW2U
PAW2U does not fully support Unicode, but it does support UTF-8 encoding. That doesn’t mean you can’t just take a Unicode GEDCOM file and import it – you will have errors. Howard Metcalfe, the developer of PAW2U, posted this information last year on the PAWriter forums:

I have not made any real effort to go beyond the officially adopted 5.5 standard. I do support import of the UTF-8 character set but not the Unicode character set. ASCII is supported simply because it is a subset of the ANSEL, UTF-8 and Macintosh character sets. I do not support the ANSI (i.e., IBM PC) character set..

The problem I ran into maybe due to this: “..although PAWriter at present only uses the characters that are common to the MacRoman character set.”